Home » Blog » Can Apple Watch Measure Blood Pressure? (If Yes, How to)

Can Apple Watch Measure Blood Pressure? (If Yes, How to)

Apple Watch is said to be the last piece of the puzzle for health monitoring. It can perform a variety of health checks from the wrist. Heart Rate, ECG, Blood Oxygen, and such other vitals are now a few taps away.

Although none of the measurements are as per the clinical level, it is useful for detecting early signs of health problems. Blood pressure fluctuation is a common problem persisting in millions of people. It desperately calls for a continuous detection method.

Do Apple Watches have a blood pressure sensor or such a feature that can flag abnormal systolic and diastolic pressure? Let’s take a quick look!

1. Which Series of Apple Watch Can Take Blood Pressure?

Up until Series 6, none of the Apple Watches are able to measure blood pressure levels alone. I say alone because it can be paired with a third-party blood pressure monitor to enable this feature.

Apple has introduced Blood Oxygen (SpO2) detection in Series 6 which is somewhat helpful in this direction but a direct way to measure blood pressure is missing.

Regarding which apple watches can measure blood pressure being paired to third-party hardware, it is all of them including the oldest Series 1 and the SE. The requirement is to have WatchOS version 3 or higher.

2. Apple’s Blood Oxygen (SpO2) is Not the Same as Blood Pressure

Just so you don’t confuse yourself, blood oxygen is not the same as blood pressure. Apple currently supports blood oxygen level detection (only).

Blood Oxygen (SpO2) is the level of oxygen in the blood, whereas systolic and diastolic blood pressure refers to the pressure in blood vessels.

A blood oxygen level of 95-100% is considered normal. If it drops below 90%, you should be concerned and are supposed to contact a medical person as soon as possible.

3. How to Check Blood Pressure on Any Apple Watch

3.1 Get a Wireless Blood Pressure Monitor

Not all wireless bp monitor has an app for Apple Watch. So you have to be a little more careful about which one you get, provided your priority is to use it from the watch.

In terms of accuracy and performance, upper-arm-based monitors work better than those wrist-based. This is another key thing to keep in mind.

We tried a few upper arm monitors (Omron Evolv, Withings BPM Connect, QardioArm) and the only one that managed to work flawlessly without any sort of dependency on the iPhone is QardioArm.

What we liked so far about QardioArm is that you can download the app on your Apple Watch and pair it with your cuffs right from there. An iPhone is not required for any task. 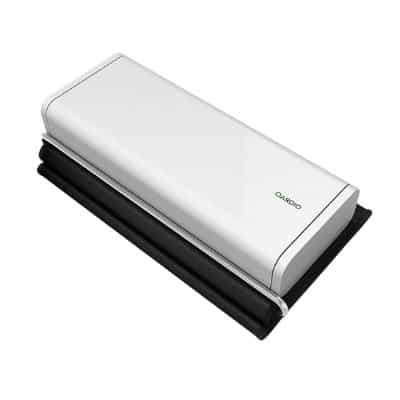 3.2 Pair the Cuffs With Your Apple Watch

Pairing the QardioArm was a breeze. Once you have the Qardio app on your watch, you will be prompted to set it up with a QardioArm or without.

You definitely should use the QardioArm option if you don’t want to enter bp data manually every time. Once the setup is done, you can request your first reading.

You will see a big green button to request a blood pressure reading. You can hit the button and it will communicate with the cuffs to take a measurement.

Besides manually trigging a reading, you can set reminders. It is useful when you have senior members in the house who require frequent checkups.

One QardioArm can be shared with 6 different people at the same time. Each member can install the Qardio app and only their own data will go to their apps. There is also a visitor mode, for which the data won’t be mixed with Apple Health.

There are two ways you can synchronize data with Apple Health.

The first one is manual input. Apple Health app on an iPhone supports manual input of blood pressure from the Browse > Vitals > Blood Pressure screen.

I am sure that sounds annoying already. This is why there is the second option. If you use an app like Qardio, you can connect Apple Health in the settings and it will automate the data synchronization for you.

In addition to that, Qardio also supports manual input on the watch. This means if you add data manually in it, it will be shared to your Apple Health automatically.

5. When Will Apple Watch Be Able to Measure Blood Pressure Without Extra Peripherals?

There are some rumors that the Apple Watch will come with Blood Pressure, Blood Glucose, and Blood Alcohol sensors in the future. It is anticipated that these features will come in 2022 at the latest with Apple Watch Series 8.

According to MacRumors, Rockley Photonics, an Apple supplier, has developed a patent to measure several blood metrics. Although some other rumors indicate that these features could come as early as Series 7 in 2021 (Update: it didn’t), Rockley Photonics’s statement aligns better with Series 8 in 2022.

Sooner or later, it would be a groundbreaking achievement for Apple Watch if they manage to pull this off. There is a large segment of people who have severe blood pressure and glucose problem. These features alone would be good enough for making them purchase an Apple Watch.

More Posts Like This
How Long Should You Wear BFR Bands? (And How Often?)
BFR Cuffs vs. Bands: Which One Is Right for You?
Best GPS Tracking Jewelry for Personal Safety
What Are the Benefits Of Wearing BFR Cuffs?
Advertisements
About the Author

My name is Abrar Mohi and I write about ways to incorporate tech into a fitness-focused lifestyle.

Should you know, I am not an expert in the department of health or fitness. The gigantic amount of time that I have put up with IoT products gave me the confidence to do what I am doing here on this blog.

Got a question? Drop it here!