Many people have this complaint about smartwatches. That, it looks childish and does not go well with all appearances.

Emporio Armani Smartwatch 3 solves the above-mentioned problem. It looks and feels like an expensive watch, and has all the necessary features to be called smart.

Let’s dive into the details so you could see what it actually offers and how it could be beneficial for you. 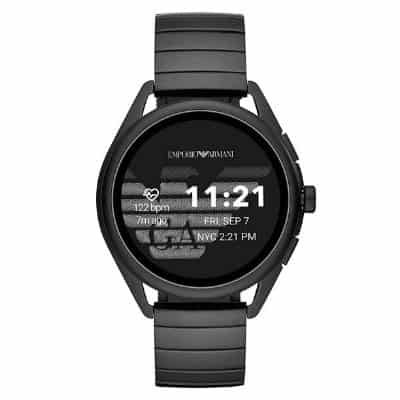 The area where Emporio Armani Smartwatch 3 shines the most is the design. The fact that it is a smartwatch got fully buried under its beautiful look.

So what did I like about it in the first place? The variant I was looking into had a stainless steel bracelet. As I love metallic bands over rubber ones, it attracted me more.

There are basically three buttons. The middle one is the main menu button. It is like a knob that you can also turn up and down for scrolling the page. The other two buttons are configurable for apps and internal functions.

Lastly, there is waterproofing in this device for a water level up to 30 meters. Walking in the pouring rain or washing your hand with it is not a problem at all, as I find myself doing it all the time.

Emporio Armani Smartwatch 3 is powered with Google’s Wear OS. This means that the watch will have an OS very similar to Android with access to Google Play Store and Google Assistant.

As a bare minimum requirement, you need a phone that is running on Android OS 6.0+, or iOS 10+. Support for Samsung is not there yet.

Emporio Armani is a brand of Fossil Group, Inc and this watch came up in collaboration with Fossil.

As a result, it got the same hardware configuration as the Fossil Gen 5. The specs are as the following:

The internal storage makes a huge difference because now you can install more apps, plus you can store songs locally.

Snapdragon 3100 is much more efficient in terms of battery life than the earlier Snapdragon 2100. You can easily have a full day battery life on this watch.

In addition to that, there are around four different battery-extending modes. Each of them disables certain hardware to provide longer battery life. You can also tune it to what you need.

There is also a “Time Only” mode that literally disables all the smart features and turns the device into a mere watch. This mode of battery will ensure it lasts for at least a week.

Smartwatches need a big push and this is probably one of them. Now you can receive and make calls from your watch.

What does that mean precisely? The watch is equipped with a loudspeaker and a microphone. It works as a receiver and transmitter of your voice to the connected smartwatch.

The limitation is that it is not standalone and you have to have your phone in range and connected to make this function work.

Most smartwatches borrow GPS from its connected smartphone. Emporio Armani Smartwatch 3 has the GPS built-in so you do not have to depend on the phone anymore.

This also means you can go out and have a walk, and still use the GPS functionality to track distance and the route.

Google Fit is the official fitness tracking platform for this watch, however, you can install any fitness app you like from the Google Play Store.

Hardware-wise, it has an always-on heart rate tracker that can monitor heart rates in real-time. Other activities like running, cycling, swimming, etc. are monitored with the help of GPS and motion sensor.

One of the most useful features nowadays is NFC. It has made making payment and connecting devices easier.

Emporio Armani Smartwatch 3 comes with NFC as well. So regardless of the platform (Android/iOS), you can install Google Pay and use it for contactless payments.

Last but not least, this watch is fully waterproof up to a water level of 30 meters (3 ATM). It even says that you can go swimming with this.

Personally, I have tried it under heave rain, deep washing of hands and I have a feeling that it will do just fine in a swimming pool.

Emporio Armani Smartwatch 3 has hardware similar to Fossil Gen 5 as it is now a brand of Fossil Group, Inc. Fossil is best known for its high tech hardware. As a result, they were quickly able to improve the performance of Emporio Armani smartwatches after this partnership.

The rumor that Wear OS has room for improvement is kind of true. It is comparable to Android in its earlier days. You get a very impressive set of features, but, occasional lags and hangs are not uncommon.

Does that mean a big no? Absolutely not. Everything it has at this point is very usable and unique. Just like Android now and Android then, it will not be long before they release a more appreciating version. Wear OS 2.0 was surely a big step in that direction.

Putting the OS part aside, this watch comes with four battery modes. Whether you can want to have a longer battery or a more performing device, those battery modes are super useful. There is even a “Watch Only” mode where it lasts for a week on one charge.

To be very honest, the price of Emporio Armani Smartwatch 3 is on the higher end. The big-name Armani did leave his mark.

If your first priority is having a very good design, Emporio Armani Smartwatch 3 is an easy choice. If you would be happy with similar specs but the design, you can opt in for Fossil Gen 5 at a lower price.

Now what I am going to say is interesting for iPhone users. When I bought this watch, I was using an Android phone and everything was great. But later, I switched to an iPhone and it felt a little different.

One big difference is that to keep the watch connected on iPhone, you have to leave the Wear OS app running on your phone. So for iPhone users, Apple Watch Series 5 might be a better option.

Samsung users have no luck because Wear OS is not yet supported in that system. There were some talks that Google brought Wear OS to Samsung Store but I could not find it myself. So a much better and smoother option for you is still the Galaxy Watch Active 2.

Emporio Armani Smartwatch 3 has created a middle ground between design and features. On one hand, the hardware is as powerful as the Fossil Gen 5. On the other hand, it has an impressive Armani finish. This watch is compatible with Android and iPhone both and offers a unique opportunity to talk via the watch. 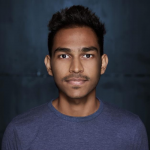 My name is Abrar Mohi and I share various ways to incorporate tech into a fitness-focused lifestyle.

You should know that I am not an expert in the department of health and fitness. I have used a good amount of IoT products which gave me the confidence to do what I am doing here on this blog.

Have a question? Drop it here!