The problem with smart weight scales is that the measurements fluctuate massively. Sometimes it is like you get on the scale, get down, get on again, and you see a different result.

Renpho ES-CS20M does not revolutionize the concept of smart scales, however, the measurements provided are quite close to accurate, and there is not much fluctuation.

It was so practical during our tests that it snatched the number one position in our best smart scales list outperforming some of the other well-known scales. 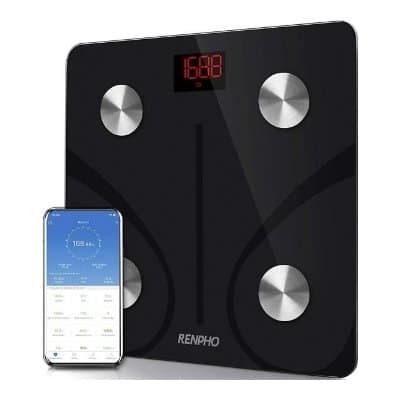 It features a tempered glass platform with four high sensitive electrodes in four corners. You have to stand in a way that the right two electrodes are touched by your right foot and left two electrodes by your left.

Electrodes are connected directly to weight sensors inside the frame with a weight capacity of 396lbs or 180kg. The sensors measure in increments of 0.2lb or 0.05kg and work quite decently.

There is a backlit LED display on it with the text in red. If there is one major flaw in this scale, that would be the fact that only weight is displayed on the screen. Other measurements are sent to the connected app.

The bottom part is secured with four anti-slip rubber pads and the scale itself is lightweight. As a rule of thumb, you should not place your foot at the edges while trying to stand on it. It could make the scale flip over.

The scale checks for body weight and plus, thirteen other body composition data. The screen on the device can only display the weight. The rest of them have to be checked from the app.

You can of course measure weight anytime. It is not obligatory to have the app with you. You will just not get the other data which is, in fact, the main reason for using a scale like this.

One scale, many users

Several measurement users can be added to the scale. To make it work, the users have to install the app separately on their phones and have their own accounts set up.

The accounts then can be associated with the scale. The person who is close to the scale and has the app running will get the data.

This is probably one life-saving feature available in this scale. After every weighing, the scale checks with the app in proximity if the measurement difference is natural.

If, for example, a different person weighs and you had your phone close to the scale, the app will reject the automatic synchronization and pop a message up asking you to confirm which person this measurement belongs to.

If you use one central hub for all your health-related data, this scale would not disappoint you. Currently it can sync data with the following apps:

This might be a little bit contradictory to what people usually say. But this is my sixth month with this scale and it is still running strong on that default set of batteries.

Just for some added clarification, I weigh myself once every day in the morning and I am the only person using this scale. If you expect to have at least 90 days of runtime on one set of batteries (3 x AAA), you probably would not be disappointed.

One area where Renpho completely outperforms the others is performance. The combo of bio-electrical impedance and precision weight sensors seems to produce nearly accurate results.

The scale connects to the app via Bluetooth and data synchronization happens simultaneously. This means when you weigh yourself on the scale, the data will get transferred.

The multi-user function works just fine and the unusual measurement fallback keeps the wrong person from polluting your data.

It is better to keep in mind that scales like this are meant for non-medical use only. The way it is built keeping the price tag low can differ the results from person to person. Using a good product like this means the error will be minimum.

Renpho ES-CS20M has a standard price tag as a bathroom scale. Due to its massive number of positive reviews on Amazon, it can be trusted eyes closed. For people who are not really a fan of battery-powered devices, the USB-rechargeable version of this is also good.

As a second option and probably the cheapest on the market is the Etekcity Digital Weight Scale. If it makes any difference, it comes with a free body measurement tape.

Wyze Scale is unique because unlike other smart scales, it boasts a heart rate tracker. If that is also something you would love to have, you can have a look.

Unlike other weight scales, the measurement does not fluctuate when you weigh yourself multiple times. The measurements provided are quite decent and comparable to medical level weight scales. Based on your input data, the app suggests healthy goals which are definitely a good starting point.

My name is Abrar Mohi and I write about ways to incorporate tech into a fitness-focused lifestyle.

Should you know, I am not an expert in the department of health or fitness. The gigantic amount of time that I have put up with IoT products gave me the confidence to do what I am doing here on this blog.

Got a question? Drop it here!